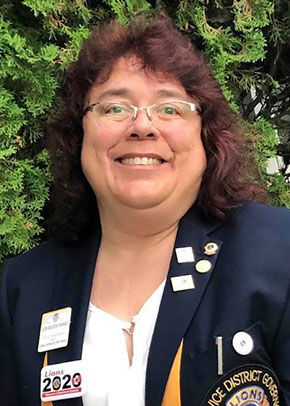 Lion Melodie Franko was born in Drayton Valley, Alberta and raised on an acreage East of Ardrossan. She graduated high school in 1986 then college in 1994 from Canadian University College (now Burman University) in Lacombe, Alberta. Upon completion of her studies, she went to work in finance and administration for an upholstery company where she met her future life mate, Kirk. Lion Kirk brought her into The Stony Plain Lions Club in 1996, where they were engaged and then married in 1997. Their only daughter, Loreen was born in 1999.

Lions Kirk and Melodie live in Stony Plain, Alberta and made the decision to have at least one stay-at-home parent, so Lion Melodie started 3CPO Accounting Services Ltd. in 2001. She continues to work part-time as an accountant and bookkeeper.

Lion Melodie served as Club Treasurer of The Stony Plain Lions Club for 11 years and received 100% attendance for those 11 years. Served as Club Convention Chair in 2008 where she received an International President’s Certificate of Appreciation and a Melvin Jones Fellowship. She is also a recipient of a Bill Webber Fellowship and a Lion’s Quest Fellowship. She has received numerous Club awards. She was appointed Zone Chair under her mentor, the late PCC Bill Ingram. At the District level, she has served as Lions Quest Chair and has taken the teacher’s training. She has also attended a USA/Canada Leadership Forum.

The Frankos have hosted three youth exchange students from Peru, Brazil and Finland.

Lions Kirk and Melodie Franko transferred their membership to The St. Albert Host Lions Club in 2009 where Lion Melodie continues to serve. She has served as Club Director, Vice President and President 3 times. She also serves on various committees. In 2018, she received a Club award recognizing her two years of President of outstanding Club leadership. In 2019, she received Lion of the Year.

Lion Melodie had been elected to serve District C1 as 2VDG at the MDC Convention May, 2019. With this election, opportunities have been opened. Along with the Online Lions Learning Center, she has attended ALLI in November, 2019 in Rosemont, Illinois. COVID 19 hit in March, 2020 and instead of slowing down, Lion Melodie has taken this opportunity to find new ways to serve.