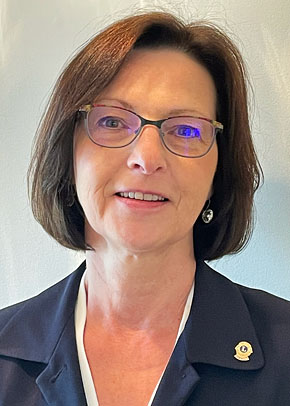 Lion Suzanne Leshchyshyn  has been a Lions member since 2011 and has held many positions at the Club (membership chair, president), District (cabinet secretary and zone chair for multiple years) and Multiple District levels (Convention Chair, Lions Quest, long range planning, and constitution and bylaws). In recognition of Lion Suzanne`s service and leadership, she has received a Progressive Melvin Jones Fellowship and a Judge Brian Stevenson Fellowship. She has received numerous International President’s Certificates of Appreciation, and in 2020-21 Lion Suzanne received an International Presidents Leadership Medal. She has also recognized by the Multiple District for her commitment to New Voices in the area of Leadership.

Lion Suzanne is a Lions Facility Development Instructor, and has earned her Bachelor’s and Master’s from the Lions University. Lion Suzanne has facilitated many training sessions at the District and Multiple District level. Lion Suzanne takes pride in calling The Blindman Valley Lions, District C-1’s newest Lions club, her Lions family.

Lion Suzanne believes in engaging clubs and inspiring others to learn more about Lions, our cause and how we serve in our communities and globally. Teamwork and communication are necessary at all levels of Lionism. She encourages members to reach new and higher goals for themselves and empowers more Lions to take on leadership roles.

Lion Suzanne has been service-minded since a young age. Born and raised in a rural Alberta farming community, she was involved in 4H as a youth.  She then went on to volunteer her time as a leader for many years mentoring and working with youth. Lion Suzanne was involved for many years with the Alberta Ride for Sight event raising awareness and funds for vision research and cures through the Foundation Fighting Blindness. Suzanne ran her own Home Décor business for many years, growing her team to over 10 members. Lion Suzanne and her husband Lion Dave were avid motorcyclists until a few years ago when Lion Dave lost his vision. They now have new hobbies.

Lion Suzanne has a Diploma from NAIT and a BSc from the U of A. She has worked primarily in the agriculture industry as a public servant throughout her career. From Home Economist to Business Development Specialist to Project Manager and most recently as a Field Office Administrator. She’s earned various accolades through the years, including an Alberta Premier’s Award of Excellence for her role in the development of legislation for confined feeding operations in Alberta. 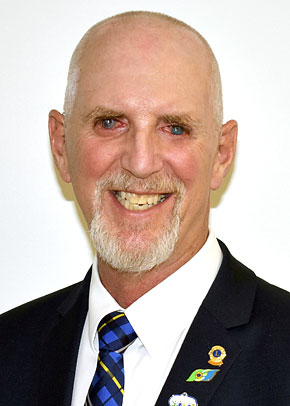 Lion Dave Leshchyshyn had a couple of starts as a Lions member. The first was as a single Dad raising two young girls.  The commitments of fatherhood, work and Lions became too cumbersome, so he stepped back as a Lions member. A few years later, Dave was approached again by a local Lion and has now been involved as a member for the past 11 years.

Lion Dave started his working career as a Radio announcer at CFSL Radio in Weyburn, Saskatchewan, moving on to work for CKRM Radio in Regina, Saskatchewan, then becoming an Albertan, working for CKGY Radio in Red Deer, Alberta. Lion Dave spent 10 years behind the mike, before moving on to advertising sales. After a few years in Financial Services, Lion Dave became Manager of a construction equipment rental company in Sylvan Lake, Alberta.

Lion Dave grew up on the family farm in Saskatchewan and credits his parents with his interest in helping others, giving of their time when theirs was limited, giving of  their substance when others had less, getting their hands dirty when there was a need. Lion Dave credits his Radio career with learning teamwork by promoting and helping at events for many non-profit organizations like the Red Deer MS Society, the Red Deer Boys & Girls Club, Red Deer Special Olympics, among others. Evolving into this “Lions Thing” was just a natural.

Lion Dave is forever thankful to have met his partner for life and companion in Service, Lion Suzanne.  Together they have taken the opportunity offered by Lions to help others, to learn more, to take on new challenges, to mentor others, and to create new friendships around the world. Dave & Suzanne call Sylvan Lake home, but their Lions home and family is with the Blindman Valley Lions Club, which they are proud to be Charter Members of.

Dave & Suzanne have two grown daughters, both independent, career-driven individuals, which means there’s less chance of them moving back home. 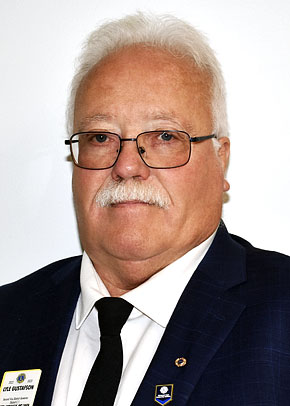 My name is Lion Lyle Gustafson.  I am blessed with my lovely wife Jill, our 2 children, Chad and Jason, and our 8 grandchildren.

I am currently the 2nd Vice District Governor for District C-1, and was Zone Chair last year, and was Past President for my club, Devon Lions.