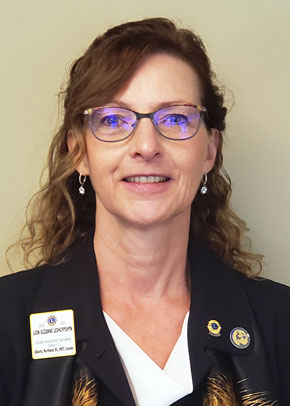 Lion Suzanne Leshchyshyn was born and raised in the rural farming community of Vimy, Alberta. After graduation from high school in Legal, she went on to NAIT and graduated with a Diploma in Dental Assisting. She later earned her B.Sc. in Home Economics from the U of A in 1986. Suzanne has worked at Alberta Hospital Ponoka, and a few years with Red Deer College. She worked for many years with Alberta Agriculture in the Peace Region as a District Home Economic and Business Development Specialist and in Central Alberta with Livestock Diversification.

In 2004 Suzanne earned a Premier’s Award of Excellence as a team member in the development of Legislation for confined feeding operations in Alberta. Suzanne currently works full time as an Office Administrator for the Central Region of the Natural Resources and Conservation Board in Red Deer.

Suzanne was involved in 4H as a youth, and then went on to volunteer her time as a 4H leader for many years,  mentoring and working with youth. Lion Suzanne was involved for many years with the Alberta Ride for Sight event, raising awareness and funds for vision research and cures through the Foundation Fighting Blindness. Lion Suzanne and her husband Dave were avid motorcyclists up until a few years ago when Lion Dave lost his vision.

Lion Suzanne has been a Lions member since 2011 and has held many positions at the Club, District and Multiple District Level. She has received numerous International President’s Certificates of Appreciation and many 100% attendance awards. In 2018-2019 she was recognized by the MD with a certificate for her commitment to New Voices in the area of Leadership. Lion Suzanne received a Leadership certificate after completion of the Lions Faculty Development Institute program in Reno in January 2019. She also completed the Guiding Lions Training in 2017 and 2019.

As a Lions Certified Instructor, Lion Suzanne taught the Guiding Lion program in 2019 and was a faculty member at the 2020 Regional Lions Leadership Institute in Edmonton. Lion Suzanne has attended two USA/Canada Leadership Forums where she earned her Bachelor’s and Master’s degrees from the Lions University in 2018 and 2019 respectively. In recognition of Lion Suzanne`s service she has received a Melvin Jones Fellowship and a Judge Brian Stevenson Fellowship. Lion Suzanne takes pride in calling The Blindman Valley Lions, District C-1’s newest Lions club, her Lions family.

She will continue to work at inspiring others to learn more about Lions, our cause and how we serve in our communities and globally. She will encourage members to reach new and higher goals for themselves in their club and other levels of Lions, and to empower our younger generation to become Lions.

Lion Suzanne is married to Lion Dave; they live in Sylvan Lake and have two adult daughters.